Anyone can walk down Duval Street and go into a bar.  But, since my sister-in-law and brother-in-law got married in Key West, we felt it was necessary to plan the perfect pub crawl – maximizing fun and minimizing crowds.  As I suggested yesterday, you can plan your bar-hopping to start after dinner, about 8pm, but this route will work any time of the day.  Drink prices at all the stops are pretty reasonable, though you won't find many, if any, specials at night.


First stop, a very famous bar that gets very crowded, but as an early stop, it shouldn’t be too bad.   There are plenty of places to sit outside, but this place can get filled with tourists, so have a drink and move along.
Stop 2 – World’s Smallest Bar


I love things that are considered “world’s smallest” or “world’s largest” and this bar is no exception! 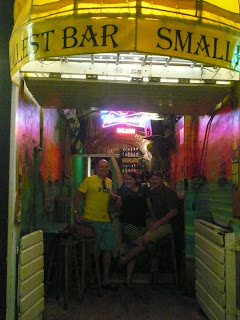 There isn’t room for too many people in this joint, so come early and grab a drink before you can’t belly up to the bar anymore because it’s really only about eight feet wide!


This location was the original Sloppy Joe’s back in the day, and the same bar where Ernest Hemingway drank many, many drinks.  You’ll find a lot of surprises at Captain Tony’s, starting with the bras hanging from the ceiling.


Another perk to Captain Tony’s – free cups to drink from so you can take your beer to go. 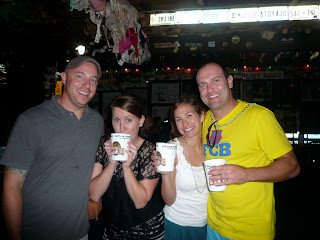 ** Special note: It is actually illegal to have an open container in Key West.  There are only seven places in the U.S. where it is okay to have an open container while wandering about on the streets (including New Orleans, I talk all about where to drink in the Big Easy here).  Key West is not one of them.  However, everyone does it.  But, if everyone jumped off a cliff, would you?  I might, because I definitely do take my drink "to go" in Key West!


Rick’s is definitely the kind of place you want to go a little more late night.  Why else would you try the pickleback shots? 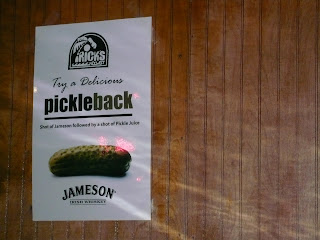 If you are not privy to the pickleback, then you haven’t lived.  Or died, which is what it feels like you’re doing when you take a pickleback.  It is a shot of whiskey followed by a shot of pickle juice.  Once you have that shot, you’re ready for everything, including the band downstairs from Rick’s at Durty Harry’s. 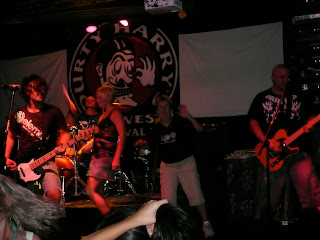 By now, this place is getting pretty crowded and you’ll be able to dance for a few hundred of your closest friends before heading to the next bar.


Sloppy Joe’s is on the list of National Register of Historic Places, but it’s no longer really known for Hemingway, but instead now for large crowds and fruity, slushy drinks.


If you can navigate through all the crowds and find a good spot to dance, you can kick off your shoes and party!


This is where most nights in Key West end.  The live music is always entertaining and the clientele is always a blast.  My sister-in-law even threw her wedding bouquet here at this bar – romantic!


If you’re looking to continue the party, you can head south on Duval to drag show central.  You’ll find several shows going on, but one of the best is at 801 Bourbon Bar.  That's where I discovered this great song:

Just imagine a bunch of drag queens singing it :)

Where is your favorite place to stop in Key West?
Posted by Economical Explorer at 9:32 PM