Tips and Tricks for Using Groupons

I have been using some really awesome Groupons lately!  As a disclaimer, I am not a Groupon addict.  I buy one or two at a time and then use them.  I mainly use them to explore restaurants and attractions that I would not normally do in an economic way.  For example, I recently used Groupons for a painting/wine class and a zoo trip… both economical experiences coming soon on the blog, but here’s a preview: 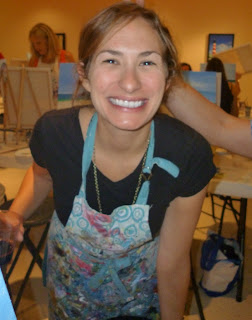 I hear a lot of people complain, though, about two issues they have with Groupons.

1.      The Groupon offer expires before they can buy it.

As I’ve mentioned before on this blog, sometimes you just gotta put yourself out there and ask (for example, my friend Amy asked for an upgrade on her cruise).

Case in point, my husband wanted to buy a Groupon to learn how to kite surf (he claims that since I won’t let him get a motorcycle, he needs to kite surf.  I don’t get it).  He saw it online, but didn’t get a chance to buy it before the deal was no longer available.  He called the company offering the Groupon and asked if he could still have the deal… they said yes!  The way I see it, the company might be even more willing to sell you the product at the Groupon rate without going through Groupon because then they don’t have to give Groupon a cut.

You already know that if your Groupon expires, you can still redeem it for the value you paid (i.e. if you paid $15 for $30 worth of food, you can always use the $15 you paid).  You probably got an email about it a few months ago from Groupon.


But, that promotional value may not be lost.  Again, you just have to ask.  My sister-in-law bought a Groupon for paddleboarding, but realized just before the expiration date she wouldn’t be able to use it before the due date.  She called the company and they said they would make an appointment for her in the future at a more convenient weekend… at the Groupon rate.


Most Groupons for restaurants say “one per table.” 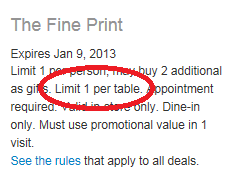 If you ask your server nicely, and promise a tip on the *full* amount, versus the Groupon amount, they might be willing to use two at a table (I’ve had luck with this!)


I’m always astounded at the deals I get on these websites, but one of the best I ever purchased was: 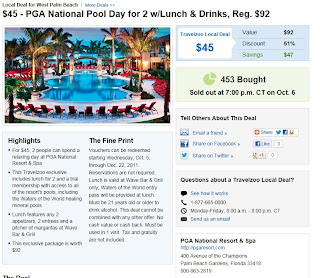 Just $45 for a pool day at PGA National Resort and Spa.  That included swimming around in all of the pools, as well as two appetizers, two entrees, and a pitcher of margaritas.


This was one of the best deals because I would never purchase it for myself for $92!

What was the best Groupon, or other deal website, you’ve ever purchased?
Posted by Economical Explorer at 7:01 PM

Email ThisBlogThis!Share to TwitterShare to FacebookShare to Pinterest
Labels: Groupon