In October, five glorious years ago, I went on my first vacation with this guy to Key West.  We went through about five bottles of champagne (not counting the drinking we did at bars), were too intoxicated to walk at one point, and had the time of our lives.


Yes, his name was Frank.


So, I think this is a good time to review how to spend 24 hours in Key West without having to wire home for money.

The best way to get around Key West is most certainly on two wheels.  I’ve rented from Eaton Bikes before and they were very courteous and economical.  I actually rented a tandem bike there for just $25 a day.  Or you can get a regular beach cruiser for $18 a day.  Once you have your bike, you can see the sights.


The. Best. Breakfast Spot. Ever.  The crepes are delicious and the omelettes are scrumptious.  Or you could choose something else from their menu with a French feel.  The prices aren’t bad either.  The egg and cheese crepe is less than $6.  Even though this early morning spot is on Duval Street, it’s not near all the crowds.


From Banana Café, it’s just a short jaunt south on Duval Street to the Southernmost Point. 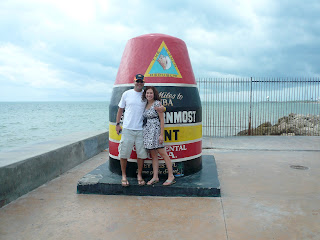 It gets really crowded here as tourists line up to take their picture in front of this landmark, so it’s in your best interest to get here early.  Then, jump over to the next street, Whitehead, and take it north, until you find yourself at…


Now, I love me a good museum, and what better museum than one dedicated to one of the most influential writers of our time, who loved to drink, and who also allegedly had six-toed cats?


It will cost you $13 per person to see the Hemingway House, a price worth it just to imagine what it was like to be Hemingway, and to live in Key West in the 1930s.


If you’re not from Florida, this will be shocking, but the beaches in Key West are actually no bueno.


Still, it’s worth seeing, so ride your bike from the Hemingway House, south on Whitehead, until you see signs for the park.


A great lunch spot, this company actually catered my sister-in-law’s wedding.  The food can be a little pricey, with sandwiches running about $11-$12, but the food is outstanding.


Key West is definitely a city where you can people watch and window shop for hours. 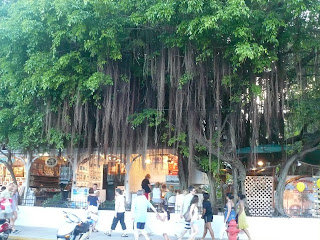 You’ll see some pretty interesting things in the windows and you’ll likely see drunk people all over the streets, even at two in the afternoon.


At the northernmost end of Duval Street, you’ll find a place *great* for watching street performers. 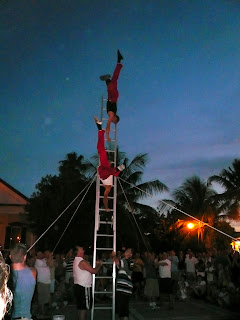 Wander around, enjoy a few, but don’t watch the sunset here, because there’s a better spot down Duval…


The view from the top of the Crowne Plaza La Concha absolutely cannot be beat.

This is a hotel (a pricey hotel at that), but you can just zip right up the elevator to the top floor to watch the sun go down in what looks like a glorious ball of fire.


I think I’ve eaten at Mangoes on every trip to Key West I’ve taken.


Not only is the food solid, but the restaurant’s location is very central, right on Duval Street near many of the good bars (and drag shows!)


8pm – Drinking on (and around) Duval Street


This is what Key West is all about.  Before my sister-in-law and brother-in-law got married in Key West, Frank and I joined them in a reconnaissance mission to plot the perfect bars to visit at the most opportune times.  We have the list down to a science.  Stay tuned for “24 Hours in Key West – Nighttime Edition” tomorrow…

Breakfast: About $6 per person

Total Cost: $69 (appropriate amount for Key West – of course, I did not include drinks in this amount… that can vary from $20 to $2,000, depending on how your journeys down Duval Street actually go… and that’s in the daytime!)

Best Deal: Watching the sunset for absolutely nothing

Where do you find the best deals for the day in Key West?
Posted by Economical Explorer at 4:10 PM