Two for One at Miami Attractions – Coral Castle Review

If you know me, you know I’m a bit late everywhere I go.  Today, just another party I’m late to, but I just heard the ad on the radio yesterday: Miami Attractions Month .  It’s where you buy one ticket and get one ticket free to more than a dozen awesome Miami attractions.  This deal runs from October 1 – October 31, and I’m telling you about it on October 15, so like I said, not exactly timely, but better late than never!


Included on the list is Zoo Miami, which I went to on a Groupon a few weeks ago.  Our Groupon was a super deal, but regular admission wasn’t too shabby either at $15.95 each.  Now, during the month of October, you can pay just $15.95 and get admission for two people!  Also on the list is Coral Castle, which is absolutely one of the weirdest things I’ve ever seen. 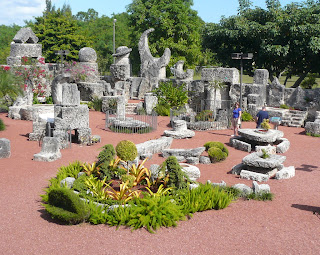 The way the story goes, Edward Leedskalnin made Coral Castle in Homestead starting in 1920 as a tribute to his true love, Agnes Scuffs, who stood him up one day before their wedding ceremony.  Not only are the tributes to Agnes completely off the wall, but Ed was only about five feet tall and weighed less than 100 pounds… and he managed to cut, carry, and manipulate this coral all by himself.


The program you get at the gate claims Coral Castle has been compared to Stonehenge and the Great Pyramids and Egypt, but I don’t know if I’d go that far.  Still, it is pretty unusual. 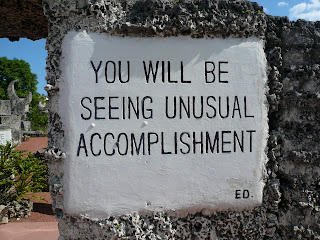 One of the first things you see when you walk in is the “feast of love table.”  This table is heart shaped and weighs approximately 5,000 pounds according to the self-guided tour program.


Ed Leedskalnin apparently liked tables.  He also made a table in the shape of Florida surrounded by 10 chairs.  The program says “Ed said he carved the chair at the head of the table for the Governor of Florida, so that he and all of the Senators and Representatives could sit around the table, rock their chairs, and figure out ways to raise your taxes.”


Ed really kicked things up a notch when he built a throne of coral that weighs 5,000 pounds.  The program says “It is comfortable.”


It does actually rock, which is pretty unique.  Ed also built a throne for his beloved Agnes, their completely made-up child, and his mother-in-law who was never really his mother-in-law because he never married Agnes.

More things old Ed created for his wife he never had and their unborn and completely fabricated child.

Ed also wanted to make sure his non-existent children were well-disciplined, so he built “Repentance Corner.”  Ed imagined he would put the heads of non-behaving children in an opening, wedge it in place with a block of wood, and then he would sit on the bench and reprimand them.  Not 100% sure that's actually legal, Ed.


The most incredible part of Coral Castle, and unlike other parts, one that doesn’t give me the heebie jeebies, is a nine-ton gate.  The gate weighs approximately 18,000 pounds, but can be moved with quite easily.

Even though Ed’s obsession skeeved me out a bit, Coral Caste is definitely worth a few hours to see how one man moved and built coral in a very strange tribute.

Best Deal: If you go during Miami Attractions Month, if you buy one admission ticket, you’ll get one free!

What is the weirdest attraction you’ve ever seen?

Posted by Economical Explorer at 8:42 PM