The Irish are very serious about their train travel. The trains are clean, easy to understand, and, if you buy online, pretty cheap.
I took a lot of trains in Italy. Except for the high speeds, the bathrooms smelled completely undesirable. In Ireland, however, I didn't hesitate to use the facilities.
Also in Italy, we went so far as to get on the wrong train, that's how poorly things are marked.  In Ireland, your ticket shows a train car and a seat

When you look at the train, you can determine exactly where to sit because the train doors are so clearly marked. 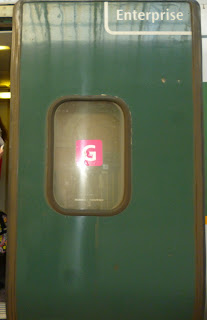 And if for some reason you get confused, your name is actually on the seat. 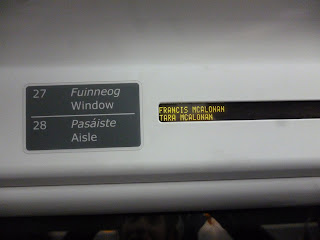 If you purchase your train tickets online, you'll also find travel buy rails to be inexpensive. On a 3.5 hour ride from Westport to Dublin, we paid only €21.99 online. However, we paid €38 for the same train ride when we arrived in the Emerald Isle (disclaimer: I was on a lot of Ativan at this point and was not really in the business of being economical).

The trains are also on time, which the Irish appear to pride themselves on. 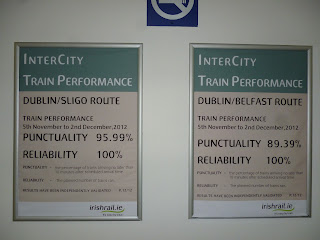 You'll also find wifi on all the trains.
The trams throughout Ireland are just as amazing. Dublin has two main train stations: Heuston and Connelly. For whatever reason, they don't connect, even though, if you want to go from the west coast to Belfast, you'll need to go through both.  If you take a tram, you’ll pay only €1.60.  Taking a taxi will set you back €25.

Posted by Economical Explorer at 5:41 PM