Flamingo – The Southernmost City in Mainland Florida, Part I

The number of things to do in Florida just astonishes me.  You can drive two hours and feel like you’re in a completely different country.  That was exactly the case when we set off for Flamingo, FL.

There’s only one road into Flamingo and one road out – it’s the road the leads you into Everglades National Park.  While there are plenty of things to do inside the park (like visit Anhinga Trail), if you drive about 35 miles down the main park road, past the “panther crossing” signs, and winding amongst the swamplands, you’ll find the little town of Flamingo. 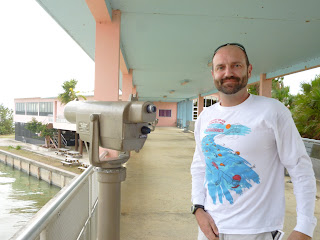 There’s not much in Flamingo.  People used to live here in the early 1900s, before it became part of Everglades National Park.  Park rangers used to live here too, until 2005 when storm surge from Hurricane Wilma destroyed much of the area.  Today, it’s a great place to take a hike or three.  Here are some of the ones I traversed on my time there, without paying a dime.

This trail was one of my favorites, namely because it was only half a mile and we got to investigate lots of nooks and crannies off the main trail.

Although this isn’t really the spot to see alligators, we did see two vultures getting into a fight. 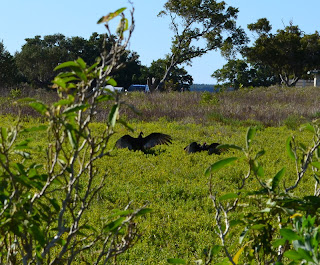 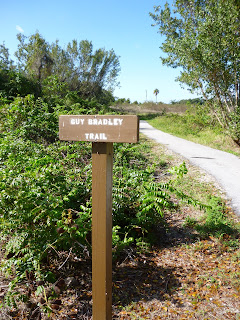 We took this trail to the Flamingo Visitor Center and back to the campground amphitheater, making for a two-mile hike.  The trail is named after the Audubon warden, Guy Bradley, who died while trying to protect birds from plume hunters back in 1905.
Much of the trail is along the Florida Bay.
This trail was heavily biked and walked, and here, we saw a bird munching on a fish about 50 feet in the air.
The campground amphitheater is pretty cool itself, right on the water, and at night, a ranger gives talks about the National Park system. 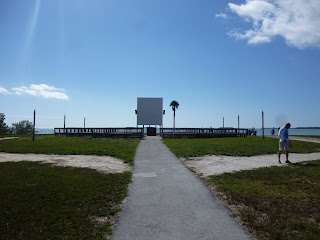 We also started this trail, but stopped when we realized it was 7.5 miles one way.
If you’re hiking, you might as well walk your way to Flamingo’s one and only restaurant/bar – The Buttonwood Café. 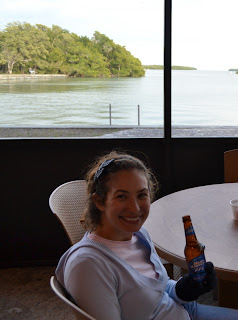 There’s not much on the menu at the Buttonwood, but beers are only $3, which is about as economical as it gets!

Cost: $10.68 for three beers
Best Deal: Seeing so many cool things in nature for free!  Plus, even though there is normally a $10 charge to get into Everglades National Park, for some reason, the ranger waved us through without paying a penny!