Canada Road Trip Part III – Things to Do in Toronto

With three friends from college, driving a puke green VW bus (click here for proof!), we made a third stop on our Canadian road trip in Toronto.  We spent more time in Toronto than any other Canadian city, enjoying the top sites.  Starting with…


A Baseball Game at Rogers Centre 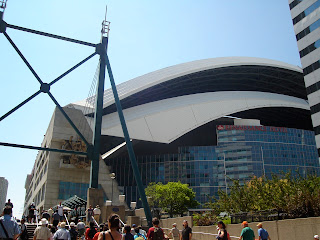 If you know me, you know I hate sports and really didn’t know a “down” was a first down and not a “touchdown” until recently.  Still, my friend Kate digs the sporting scene, and I do like drinking, so we saw the Toronto Blue Jays versus the Baltimore Orioles.


I couldn’t tell you what happened during the game, but there were some people throwing around a ball and there was also a cool retractable roof!


Bonus – as in true baseball fashion, hot dogs stands swarmed the stadium.  Unlike in America, these hot dog stands sold veggie dogs (they were $3 each)!  Tickets to the game were $21 for four people.


This is a great area for shopping.  Not only will you find every store imaginable (H & M, Forever XXI, J. Crew… those are the stores I imagine!), but you’ll find local stores nearby (I bought a cute top in this district!).


What happens when someone has so much money that they don’t know what to do with it? 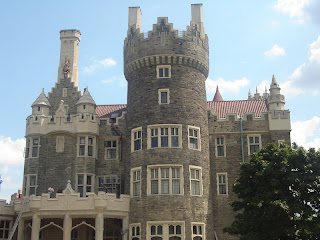 They built Castle Loma.  Complete with secret passageways and a conservatory.

According to the brochure at the museum, it cost Sir Henry Mill Pellatt, a prominent financier, $3,500,000 in 1911 to build Castle Loma.


Tickets here are $20.55 and seeing as how I am a sucker for history and the extremely opulent, I think it’s worth it!


About 1,100 feet up, you can stand on a glass floor.  The CN Tower website says “The Glass Floor has been specifically designed for you to have fun on it, so walk or crawl across it, sit on it or even jump on it.  Don't worry it won't break.”


Well... I was worried.  So I just stood on the side of the glass floor. 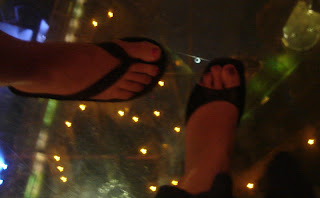 We also dined at the CN Tower, at 360, which, as you can imagine, spins around (slowly, thankfully) while you're eating, offering views like this. 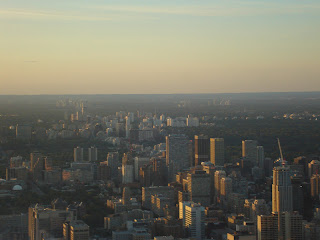 Prices are not cheap, with appetizers about $15 and meals about $35.  But it was a friend’s birthday, so we lived large.  And for the views and the delicious food, I think the prices were actually worth it.


The Toronto branch of this comedy club was the breeding grounds for celebrities like Dan Aykroyd and John Candy (thanks for that information Wikipedia).


We saw a show called “Bird Flu Over the Cuckoo’s Nest” and it was hilariously funny.  Tickets were $20 in 2006, today they are $24, if that gives you any indication of inflation.


Looking for a place to stay?  I don’t have any great ideas actually.  We stayed at the Holiday Inn Express Downtown on Lombard Street. 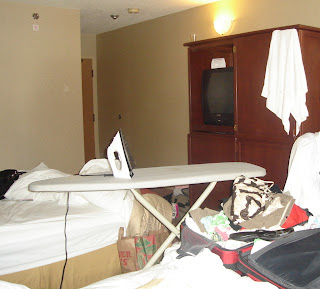 The rooms are nothing incredible, but the view is pretty great. 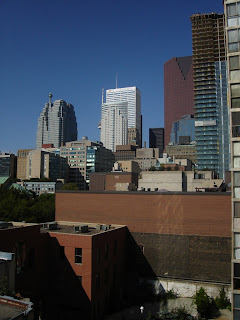 Best Deal: Saving about $24 at CN Tower by eating at the restaurant!

CN Tower is one of the tallest buildings in the world... what's the highest you've been in a building?

Posted by Economical Explorer at 7:23 PM