Alright, already, the title of this post seems dangerous.  Painting and drinking, while awesome together, can be a scary combination.  Just ask the guy who sat next to me after I stole his white paint (sorry, sir!).


Here’s an example… this is how the night started: 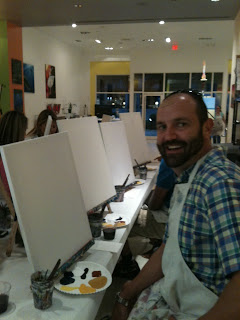 And this is how the night ended:

Anyway, I purchased the Groupon to Uptown Art in West Palm Beach for my sister-in-law for her birthday (which is also my birthday, lucky Frank!  If he forgets either birthday, he’s in deep doo doo).  I thought I would give myself a present as well.  I paid $32 for a 3-hour painting class, regularly $70 – that’s more than half off!


The week we were scheduled to paint, Frank kept trying to get me to bring someone else.  Once we started though, he was like Van Gogh, only without the whole cutting off the ear thing.

Uptown Art is awesome because they give you the canvas, painting gear, and as much paint as you need.


Our class was three hours, with about a half an hour break.  You’re allowed to bring as much food and wine as you want.


The best thing about Uptown Art isn’t the free paint, the nice staff, or even the final painting.  It was hanging out and doing something different with the people I loved.

And when I look at the finished work on my wall, I will always remember that. 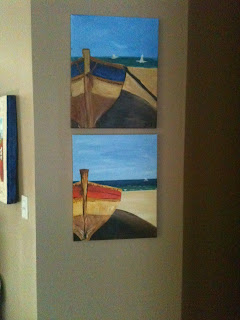 Best Deal: Making personalized art for half off the regular price

I had a great time at the class, but tell me the truth... If you had to sail off in a boat, would you pick the blue or the orange one?
Posted by Economical Explorer at 5:21 PM