My Groupon experiences just keep getting better and better.  A few weekends ago, my dear friend Amy took me on a Groupon to Zoo Miami.  And check it out… 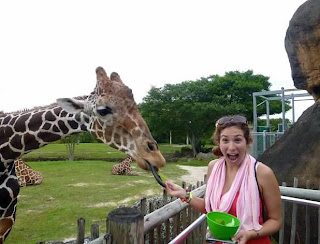 OMG!  I got to feed a giraffe!  And his tongue was super crazy!  It was purple and rough, and if you can’t tell, it surprised me greatly!

I would never ordinarily feed the animals at the zoo.  Even though I’m a vegetarian, I don’t even like animals.  And I especially wouldn’t pay the $3 charge.  But the giraffe feeding was part of the Groupon Amy purchased.  That Groupon was just $15 a person, a price I thought was well-worth it to get up close and personal.

We also got a “professional” picture with the giraffe, normally $5.


Our Groupon also included a bird feeding (traditionally another $3), and if anyone knows me, they know I love birds.  I once had a bird, a female cockatiel named Mr. Bojangles.  On Christmas Eve one year, I opened the front door and she flew out.  I had never seen her fly before and I feel like maybe she flew right to this zoo.


Now, I’m no zoo-guru, but Amy is, and she says this is the closest she had ever been to a jaguar. 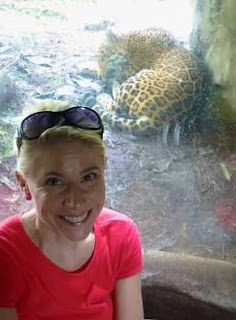 We’re just lucky it didn’t claw our eyes out, look at this ferocious thing.


One thing that really hit home while I was at Zoo Miami was how much gorillas and monkeys look like humans.

And this monkey was astute enough to put a box over his head when it started raining. 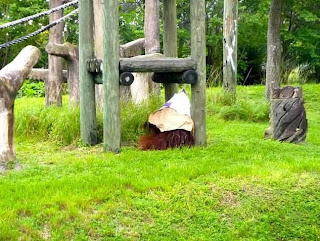 Clearly quite evolved, even the humans didn’t have a box to put on their heads!

My favorite animal of all time though is the otter.

Not everyone at the zoo is so ambitious.

We, however, were not as lazy as the lemurs.  We also redeemed a trip on the monorail (normally $3) and a souvenir cup (worth $3.95) under our Groupon.

Under normal circumstances, these are the zoo prices:

Our Total Cost: $15/person (with Groupon)

Best Deal: Sticking my head in an elephant’s butt 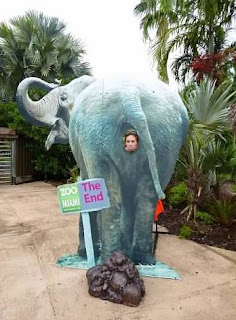 What’s your favorite part of the zoo?
Posted by Economical Explorer at 8:17 PM