The way the story goes, back in the 1800s, a man was staying with his uncle at the St. Francis Inn in St. Augustine. 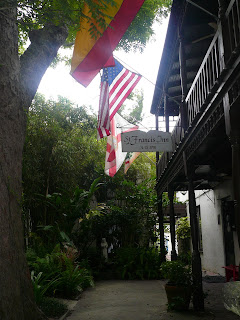 He fell in love with one of the black servant girls, and the two had a love affair throughout the rooms of the St. Francis Inn.  Then, one day, the uncle found his nephew and the servant, and forbade them from seeing each other ever again.  The man became extremely depressed and killed himself.  Now, guests at the inn report seeing a ghostly woman dressed in white, perhaps returning to find her lover (this story, according to the Inn’s website).


Frank and I, too, were guests at St. Francis Inn.  But the only usual happening during our stay was someone drank most of the complimentary sherry that was left on the mantle. 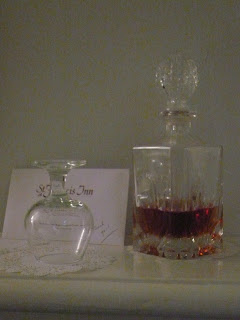 But, it probably wasn’t anything paranormal, as I saw Frank hitting the bottle several times.


Frank still blames it on the ghost.  Although, regardless, I’m pretty sure this bed and breakfast no longer offers free sherry after our trip.


I digress, the St. Francis Inn is not plagued by the ghostly stories.  In fact, the Inn even offers a Paranormal Package, where you can stay in one of the allegedly haunted rooms and you get two free books about ghosts in St. Augustine, along with a ghost tour. 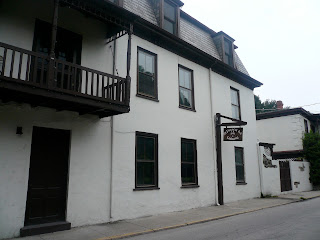 Whether it’s haunted or not, St. Francis Inn still ranks as one of the best places I’ve ever stayed.  Inside, the rooms are small, but cozy.

The hotel is located just a few blocks from the major sights of St. Augustine, some of which, like the Castillo de San Marcos, are also haunted.  The grounds of the hotel are quite lovely. 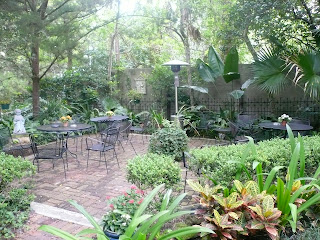 You’ll also find free bikes to ride on the premises and a swimming pool perfect for sunning. 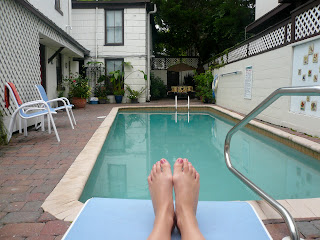 In fact, in addition to the free bikes, St. Francis Inn has no shortage of great perks.  You’ll also find a free breakfast buffet, with mimosas and Bloody Marys included.


Just before dinner, between 5:30pm and 6:30pm, you can attend the “evening social,” where you’ll get to partake in complimentary wine, beer, and appetizers.  After grabbing a bite to eat, you can finish off with dessert hour at the Inn (from 7:30pm to 9pm), where you can taste everything from peach cobbler to strawberry delight cake, for absolutely no cost.


If the beach is more your thing, St. Francis has lodgings on the sand as well, which you are free to use if you stay at the Inn (included towels, an outdoor shower, beach chairs and bottled water).


The reason we stayed at the St. Francis Inn, initially, is because it was quite economical (we paid less than $200 a night in August).  After having such a terrific stay, we book the hotel for our friends as a wedding gift.


If you are into the ghost thing, there are plenty of other places that are haunted in St. Augustine, including:

Total Cost: About $400 for two nights at the St. Francis Inn

Have you ever stayed in a haunted hotel?
Posted by Economical Explorer at 8:30 PM