Haunted Charleston - Was it a Ghost Caught on Camera?

I’ve taken more than one ghost tour in my time, in some of the nation’s so-called scariest cities, like Key West, St. Augustine, and many, many tours in Charleston, South Carolina.  But no tour was as scary as the tour of the Old City Jail in Charleston. 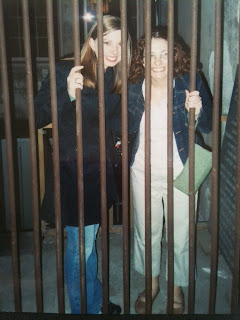 I went with my friend, Hillary neither of us thought this former jail, built in 1802, would frighten us.  Though, admittedly, the very first thing we saw was pretty eerie.


There are no lights at the Old City Jail, and you must follow the tour guide’s flashlight.  After entering the jail, one of the first things the guide pointed out was this.


Hillary and I stuck close together as the tour guide took us from room to room, and cell to cell, telling stories of many pirates and other convicts jailed within the walls.  The darkness, bitter chill, and tales of murders, hangings, and robberies definitely made our hair stand on end.  But the moment I was the most afraid, quite possibly, was when I got my pictures developed. 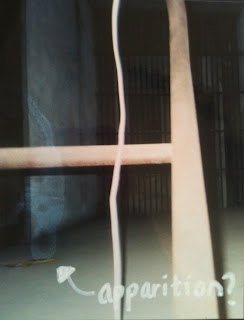 This was, perhaps, the coldest, darkest spot of the tour.  And though I don’t necessarily believe in ghosts, I’m not exactly sure how to explain this photograph.  Was it Lavinia Fischer, known as the first female serial killer in America?  Or maybe it was Denmark Vesey, who organized a slave revolt, but was captured, along with several hundred other people who planned to participate (Both stories according to this website).


All I will say, is that I definitely, absolutely, recommend this tour for a good scare.

Best Deal: Hillary and I actually got in for free because I did some volunteer work for a historic house in Charleston

What’s the closest encounter you’ve ever had with a ghost?
Posted by Economical Explorer at 5:24 PM