In Casablanca, Humphrey Bogart says one of his most notable lines, “We’ll always have Paris.”  Now, Frank and I like to say “We’ll always have Grosetto” after we got on the wrong train and ended up two hours away in a town we’d never heard of in our lives.


It started with our journey to Pisa, which, as you already know, annoyed me.  We were back at the train station, on our way to Castiglioncello, which some fellow Americans told us about while we were swimming in the beautiful waters of Vernazza .  Here’s where we were expecting to go:


Here’s where we ended up:

So how did it happen?  First of all, I’m no public transportation expert.  But I felt like I had gotten the railways of Italy down.  We were waiting on the track for the 15 minute train ride to Castiglioncello, when the train pulled up.  First indication something was awry – it was clear this was a high-speed train with assigned seating.  That’s not what we expected.  We boarded anyway.  About a half an hour later, the conductor came by, looked at our tickets, and yelled at us in Italian.  Not only we were on the wrong train, we were in first-class seating.  We did the only thing we could think of.


We went to the drink cart.  That's where we figured out that while we were standing and waiting for our train, another, very late, train came through on the same track.  We didn’t exactly know what time it was, so we boarded.


We didn’t bother asking, and just kept drinking until the train finally stopped about an hour later.  We got off in beautiful… Grosseto?

We grabbed some food and partied on the platform, waiting for a train back to where we were staying in Cinque Terre, now about TWO hours away. 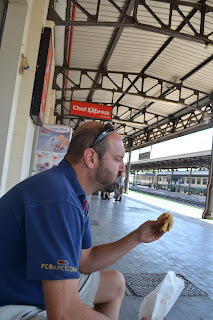 What started as a €10 train ticket to a beautiful beach town, turned into a €42 train ticket right back to where we started.  But we did learn a very valuable lesson - always check the time before you board a train.

Best Deal: On the bright side, we only spent €10 and ended up taking a trip worth €42

Posted by Economical Explorer at 10:07 PM