Where to Save Money in Vatican City

Vatican City is just one of those things you have to see, even if you aren’t religious.  Warning: this will not be one of the cheapest things you go in Rome.  I do have an economical tip though if you are really looking to save: skip the Vatican Museums.


I really don’t advise that move, but I’m just here to be economical.


First, the awesome parts about Vatican City… We started our day at about 8am.  St. Peter’s Basilica opens at 7:30am and the Vatican Museum opens at 10am.  Also, this happened to be a Wednesday, when the Pope allegedly gives his blessing to the people in St. Peter’s Square at 10:30am.  The timing was all right.


When we arrived to Vatican City, there was a long line for the papal blessing, which we stood in initially and then abandoned ship.  Instead, we pushed forward to St. Peter’s.  The line moved right on through, and without paying a penny, we were inside the church doors.  That’s when I realized getting up at 6am on vacation was one of the best decisions I made.

There was almost NO ONE there.  We had St. Peter’s virtually all to ourselves.


All to ourselves to worship St. Peter…

All to ourselves to see the beautiful confessionals…


All to ourselves to see works by Bernini… 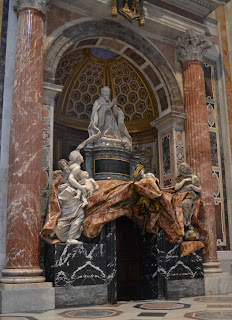 And all to ourselves to witness Michelangelo’s Pietá… 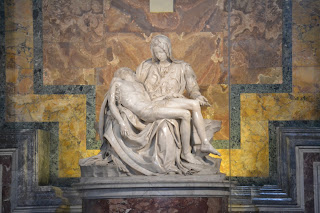 If the inside of St. Peter’s Basilica wasn’t breathtaking enough, we went up in the cupola.  It was €5 each, but we were trying to buy time before the papal blessing, so we shelled out the dough.  And wow. 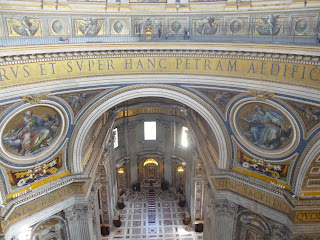 That’s the view after climbing the stairs.  You could also take an elevator for €7.  We were beyond impressed with the intricate mosaics. 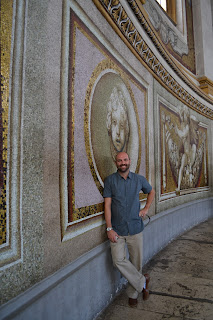 And then we realized, we hadn’t even climbed halfway up.  After more stairs, we reached the roof.

Breathtaking, and yet, this still wasn’t the top.

Finally, at the very furtherst point, a view of the city that is not comparable to anything in the world. 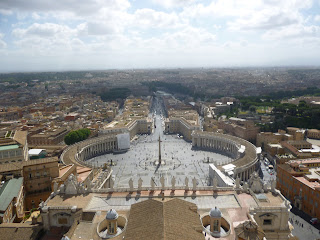 From this vantage point, we could not only see St. Peter’s Square, but all of Rome.

Frank wouldn’t stand too close to the edge since we were so high, but we still managed to get this picture. 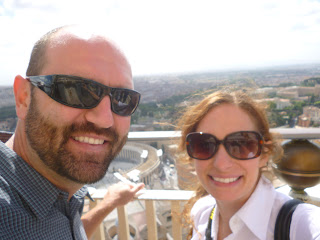 After we were back on solid ground, we could see the line for the Basilica had grown considerably and was wrapping all around St. Peter’s Square.


We could also see the Pope was nowhere to be found even though it was 10:30am and time for his papal blessing.  So disappointing.  Oh well, off to the Vatican Museums.  This is a looonnnnggg walk.  Longer than we thought.

Again, since we were pretty early, there was no line, but it was €15 each to get in.  By contrast I spent €0 to get into what I consider the best museum in the world, the Louvre in Paris (more on that in another post), so I was expecting something great.


In one of the first rooms, I decided Iwas in love with the Vatican Museums.  Only because I’m a history nerd.  I saw hieroglyphics from Egypt… 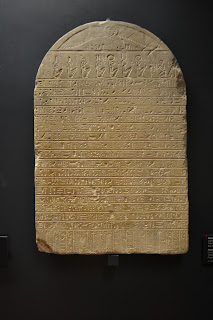 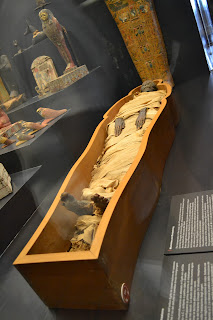 And canopic jars, where the Egyptians would store the organs of the mummies to preserve them… 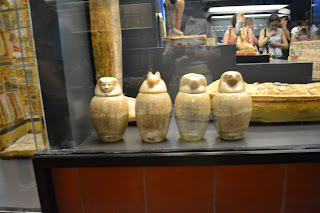 Once that room was over though, I was a little lost.  Everything was so beautiful… 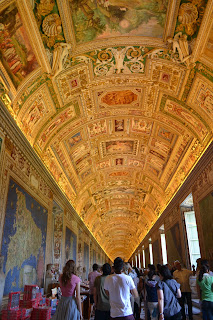 But I just didn’t get it.  Frank was bee-lining for the Sistine Chapel anyway, so I followed, weaving our way around amazing artwork, but stuff we just didn’t know existed. 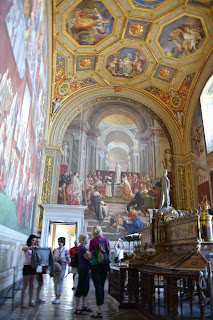 Unless someone is more apt in art than I am (and while entirely probable, I feel like I know more than many), I feel like you might need an audio guide through this.  We finally made our way to the Raphael rooms, and I was thoroughly impressed at the School of Athens.


Then finally, what we’ve all been waiting for – the Sistine Chapel.  It’s not what you expect.  It’s dark (to preserve the paintings) and the guards keep hushing people.  If they see you taking a picture, they throw you out.  The Chapel was extremely crowded, but we managed to snag a seat and took in the glory of Michelangelo’s most famous work.  It was amazing, but it also made me feel the same way as the Mona Lisa… is this it?


Finally, after our necks were sore from craning them upwards, we took a piece of advice from Rick Steves and exited the Chapel to the right, past a sign that said “for tours only.”  We weren’t on a tour, but we moseyed right out that way, which landed us right back at St. Peter’s Basilica and saved us the loooonnnnggg walk back from the front of the Vatican Museums.


A special note… do not, and I repeat, do NOT eat from the trucks outside of St. Peter’s Basilica.  We had a great experience with roadside food in Paris, but not so much here.  The sandwich was so awful that I took it back and the next one wasn’t any better.  I had to take it away from Frank and throw it in the trash.  It prompted us to come up with the phrase, “I’m so hungry, I could eat a sandwich from a truck.”  The problem was, I wasn’t even that hungry.

Best Deal: Getting to St. Peter’s Basilica so early, that barely anyone was inside

Posted by Economical Explorer at 9:30 PM