About four hours north-ish of Rome, is the town of Pisa.  In one of my next posts, I’m going to try and convince you to skip this architectural mistake, but for now, let's focus on Lucca, about 20 minutes from the Leaning Tower where tourists flock.
Friends who had lived in Italy told us about Lucca and we couldn’t have been happier.  We arrived to find a walled city, where everything inside was storybook.  We checked into our hotel, Alla Dimora Lucensa (got a discount for paying in cash and showing the owner the Rick Steves book) and were off to explore the city.  Which we did for just €3! 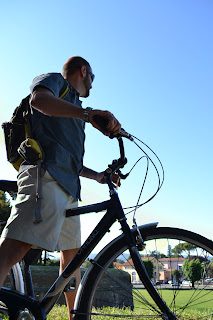 That was the cost for a bike rental for an hour.  On your bikes, you can cruise the two miles or so around Lucca while riding on a medieval wall.  When will you ever get that kind of opportunity again?
Adding some more peep to your step?  We bought a bottle of wine for our biking journey, to drink at the little parks along the way.
Actually, we bought several bottles of wine.  And for one of those, we paid only €1.90.  That’s $2.34.  Here’s the proof, from the window of the store.

I wanted to buy about 10 bottles, but Frank thought we might be able to find better deals (unfortunately, we did not.  That’s why I’m the “Economical Explorer.” He’s just with me to look pretty).
That's taken from the top of Torre Guinigi (Guinigi Tower), one of the few towers left inside the city walls.  I highly recommend paying to take the journey up the stairs as it gives the most incredible views of the city.  It cost about €4 each.

One more note, the food in Lucca was out of this world.  I would say it was some of the best we had in Italy, although I would not necessarily say it was the cheapest.  However, I thought you got what you paid for, plus some.

So, Lucca was indeed a good deal!  Here’s the breakdown of what we spent there during 24 hours for two people.

Posted by Economical Explorer at 9:42 PM