I have expressed my distaste for gypsies already on this blog.  I spoke of them before in Milan.  In fact, Milan is where I witnessed a gypsy trying to give a tourist a crappy thread bracelet, and when she refused, he slapped her.  But I digress.


The gypsies in Rome are the worst. 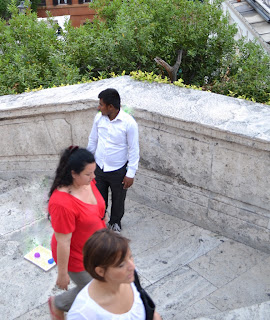 The gypsies at the major tourist attractions are always trying to sell you, well, crap.  That guy was selling this thing that when you threw it, made a piercing, crying noise.  Why would I want that?!?!

The gypsies in Rome are especially thick near all of the free tourist attractions.  Like, the Spanish steps. 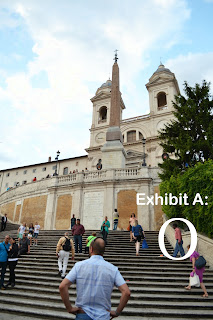 And the Trevi Fountain.  There, a gypsy was nice enough to take our picture. 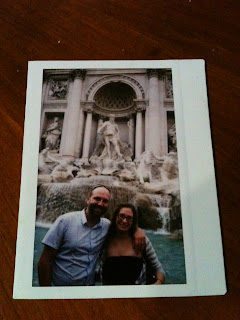 When he was finished, he asked for money.  No prob, we gave him a euro.  He wanted more.  Alright, another euro.  He wanted even more!  Greedy gypsy, you took a Polaroid, you aren’t Ansel Adams!  Plus, I took a better self-portrait myself!

But the gypsies at the train station are the worst.  They are all women holding children and it rips your heart out.  And they may rip your wallet out, so please be aware and just don’t talk to anyone out of the ordinary, especially at the Roma Termini station.  I actually ignored legitimate people out of fear, which is why Americans probably get a bad rap (sorry!).


If you are traveling for a long distance on a train, take shifts with your travel mate because even though you may have left the gypsies in Rome, it’s a common place for crooks to strike.  Both my cousin and aunt had their bags stolen while traveling in Italy (they were on different trips).


In terms of buses, there are also thieves on certain lines, like Line 64, which crosses the city and is the one we took the most.


Here, you should watch for pickpockets, and I don’t blame them for seizing the opportunity, because the tourists here were totally unaware while taking pictures with their lovely cameras.  I hate when people do that.  You know you are taking a picture through a window, right?

Best Deal: Not getting anything stolen

Posted by Economical Explorer at 7:05 PM