Bacon is meat candy.  That’s the tagline for Bacon Freak, a website from which I bought Frank a membership to the Bacon of the Month Club a few Christmases ago.  Over the course of a few months, he received Apple Cinnamon Bacon, Honey BBQ Bacon, and Hickory Smoked Bacon, among others.  It was more bacon than any vegetarian who loved her man could ask for. 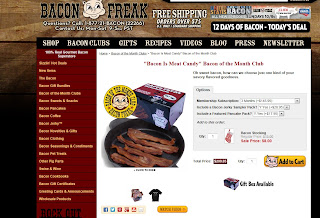 If you can see from the website page there, the Bacon of the Month Club did cost a pretty penny - $145.95, plus tax.  But, it was pretty well worth it when Frank came home to a box of pork on the doorstep once a month.


A Bacon of the Month Club is just one of the unique memberships you can buy for your friends or family this holiday.  And with just a few days left before Christmas, I tend to think the clubs where you get something delivered once a month are a pretty good idea.  For Christmas 2008, I bought Frank a Wine of the Month Club.  Once a month, we’d get a nice bottle of white and a decent bottle of red.  This wine was most likely consumed that night, but it was better than driving to the store! 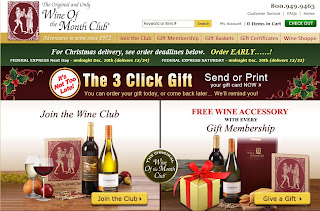 Not a bacon fan or wine isn’t your thing?  There are several other “____ of the Month Clubs” you can join.  Fruit, beer, beauty products… think about one thing the person you’re shopping for likes, and I’m pretty sure there’s a club out there.  Lucky Magazine broke down the best “of the month clubs” out there, and I think they did a pretty good job.

Fill-in-the-blank “of the months” club is the gift that keeps on giving, months after the holidays end.

Have you ever tried out one of these "clubs?"  What did you buy?
Posted by Economical Explorer at 8:17 PM

Email ThisBlogThis!Share to TwitterShare to FacebookShare to Pinterest
Labels: holidays