This weekend, I went to the library, beach, bar, dinner and the Boynton Beach Holiday Parade without pulling my car out of the driveway – I rode my bike everywhere (economical and environmentally friendly)!  And whether you’re on foot, on two wheels, or four, you can now see the Christmas tree in Boynton Beach lit up for the holidays.

The tree is located on Ocean Avenue, just east of Seacrest, across the street from the Boynton Beach City Library. 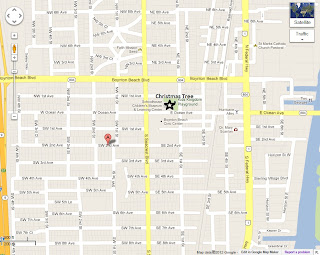 As for the parade, it was pretty much what you can expect from a small city.  However, only in South Florida can you see a holiday parade with a beautiful sunset in the background, while enjoying 70° temperatures. 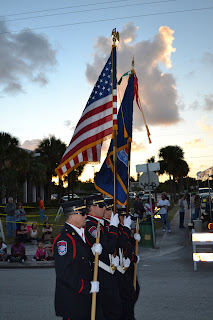 Virginia and Jason from the KVJ show on Wild 95.5 in the morning were the masters of ceremonies.  As promised, I did stalk them.  Actually, we happened to park our bikes, and our water bottles filled with wine, right across the street from them.  Their antics were just as funny as on the morning show.


We saw lots of school marching bands perform, but Frank felt none of them were as good as the band in Drumline.  The band from Roosevelt Middle came pretty close.

Forgive my awesome video skills, as I had a water bottle filled with wine.

My favorite float was from Jazzercise, and was entitled “My Christmas Wish List 1985.

There were also pirates representing.


Next up, the Boynton and Delray Beach Boat Parade!  It’s this Friday at 6:30pm, and if you need a place to watch it, you can meet me on my dock!

Best Deal: Bringing our own wine in water bottles

Posted by Economical Explorer at 7:34 PM