Driving in Ireland – Four Things That Will Freak You Out

Driving in Ireland is unlike driving in most other countries.  Here are four things that you’ll experience on the roads of the Emerald Isle that would never happen here in America.


What’s most confusing about driving on the right side of the car on the left side of the road is that all your turning is disoriented.  In America, you can make right hand turns on red because you’re not crossing any lanes of traffic.  In Ireland, you absolutely cannot do that.  Frank tried once and almost hit a truck.


Also, when you are driving in Ireland and see a really large vehicle heading to you in the right lane, you forget you’re on the left and think it’s going to hit you head on!


Ireland’s road signs are near impossible to understand


And sometimes you’ll see signs for things that are obvious…

Those Irish warn you about everything.

However, never once did I see a sign for sheep crossing.  In Florida, we have signs for Key Deer crossings and Florida Panther crossings, but in Ireland, the sheep just run wild, with no warnings.

I once saw a postcard in the Emerald Isle that said “Traffic jam in Ireland” and showed a bunch of sheep in the middle of the road.  I thought it was a joke.


Not only will you find sheep on the road, you’ll also find other, non-road worthy things.

This is why Frank did most of the driving.  After his initial shock at driving in the wrong lane on the "passenger side," he soon proclaimed to “drive like the wind.” 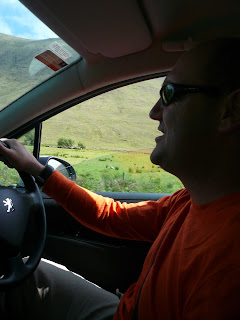 As for me?  I did pull the car into the driveway once.

Total Cost: About $200 for a rental car for a week

Best Deal: Here’s the not best deal - gas is about $7.34/gallon according to this article

Posted by Economical Explorer at 9:03 PM

Email ThisBlogThis!Share to TwitterShare to FacebookShare to Pinterest
Labels: Ireland