If you haven’t heard about Delray Beach yet (and you should have because I talked about it yesterday on the blog!), you are due for a visit.  It’s a charming beach town that the rest of the world hasn’t really discovered yet.  Although the sand is beautiful and the shops sell local art, I think the best way to see the town is… by bar.
﻿
﻿


Well, you’re in luck!  Frank and I laid out a pub crawl route that we took post-wedding that saved our guests some dinero while drinking. 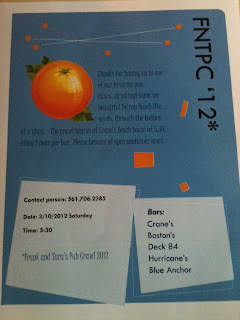 
Crane’s BeachHouse has the best bar in all of Delray Beach.  Not that many people know about it, which is kind of unfortunate for Crane’s.  Not only do they have two-for-one drinks from 2pm-6pm, the tiki bar also supplies different snacks throughout the evening.  And I’m not talking just some potato chips, I’ve seen pizza and chicken wings… for free!  Plus, a live band usually starts at 5pm, so you can munch while listening to the jams.


Boston’s on the Beach is a bar dedicated to… Boston.  The Red Sox, the Celtics, and all things Beantown are on display in this bar.  Unfortunately, this bar used to be a little ratty and just my style, but it has been re-done in the last year to be a little more upscale.  Which means a little higher prices too.


People really enjoy the Sandbar, Boston’s outdoor bar.  I have not been there yet, but their website shows half price drinks on some days, including Mojito Monday… that’s pretty economical!


When the sun is setting, Deck 84 is the place to be.  It’s right on the Intracoastal, so you always have a cool breeze blowing.


Happy hour runs Monday through Friday from 3pm to 7pm, so if you get there late, you miss the specials, but catch a lot of ambience.  This place is always bustling with people, but not in a too crowded kind of way.  More like in a “hey, let’s be friends with strangers” kind of way.


Hurricane has the best live music.  In fact, we went here on a wedding night (stayin’ classy) and the band dedicated two songs to us: “Crazy B*tch” and “F*ck Her Gently.”  If that doesn’t scream romance, I don’t know what does.
The live music doesn’t really get going until 10pm, but in the meantime, you can chill on the outdoor patio or play darts.


Hurricane deserves at least a couple of hours, so stay awhile.


I’ve had some truly fantastic times at the Blue Anchor.  In fact, it’s where I watched the wedding of Prince William and Kate Middleton at 5am.  Unfortunately, those pictures were lost in a horrific hard drive crash.

Luckily, there are pictures from my wedding weekend.

Blue Anchor is the place to hear tunes like the Beatles and Rolling Stones.  And after you’ve been to four other bars, believe me, that’s exactly what you want!  It’s a good dancing crowd, just make sure you go late enough or the crowd is a little on the older side.  But which I mean, a lot on the older side.

Total Cost: If you buy only one drink per bar (some on happy hour, which would equal two drinks!), you’ll probably spend under $25

Best Deal: Buy one, get one at Crane’s BeachHouse, along with free food!

Posted by Economical Explorer at 10:32 PM