I thought Rome was supposed to be one of the culinary capitals of the world.   I was wrong.


First of all, getting good pizza in Rome is a no brainer.  It’s everywhere you go.


In fact, I think we ate it for lunch and dinner for at least two days in a row.  I do like pizza, but the main reason we kept eating it was we found the other food selections unappetizing.


Enoteca Capranica (by the Pantheon) - had expensive wine and food, and the service wasn’t that great either.


We also had a few places that were decent enough, but nothing to write home about.  They include:


I finally convinced Frank we needed a really good meal in Rome before we departed and consulted the Rick Steves Italy book.  Frank is against Rick Steves, by the way, because he thinks it goes against everything about traveling.  I like research though, and I just consider it a tool.  And I’m glad I did.


The first restaurant it point us to was Hostaria Romana (Trip Advisor link here because I didn’t take my own pictures).  This place, not too far from Trevi Fountain, was filled with people, some tourists, some locals.  We got the appetizer platter, complete with fresh anchovies and different vegetables.


The next day, the Rick Steves book came in handy again when we found Ciccia Bomba.

Our first course, a flatbread with huge chunks of mozzarella, fresh leaves of argula, and delicious tomatoes.


And it kept getting better. 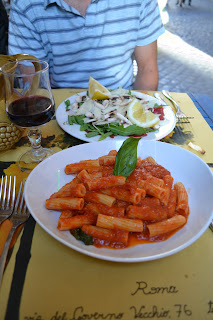 I just had regular run-of-the-mill tomato sauce with pasta.  “When in Rome,” right?  Frank got swordfish carpaccio.  And to drink…


Our total meal, with an appetizer, two entrees, and wine?  About €35, less than the cost of two entrees alone back in the states.
Here’s what it’s not hard to find in Rome. 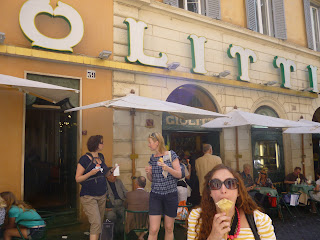 Good gelato.  We tried to eat it every day of our two week journey in Italy.  It’s never very expensive, even at the most touristy spots.

You’ll spend about €2 for a cup of gelato.  I’m not sure you could go wrong with any flavor, but after sampling dozens, my vote goes toward nutella gelato!

Posted by Economical Explorer at 10:46 PM