Titanic Belfast - A Museum Short on Artifacts, Large on Innovation

The Louvre has the Mona Lisa, the Vatican Museum has the Sistine Chapel, Titanic Belfast in Northern Ireland has… well, actually pretty much nothing in the way of art or even artifacts.  But this museum will knock your socks off.

Before the 1997 blockbuster, before the ship sank in the middle of the Atlantic Ocean that cold night in April in 1912, Titanic was built in Belfast.  This museum, located it what is now known as the Titanic Quarter of Belfast, pays homage to not only the ship, but the city that constructed what was then known as the “ship of dreams” (or was that just something that Rose said?).

Titanic Belfast takes you through nine galleries that explore this historic ship.  We start with…

What was Belfast like before Titanic?  It was a city known for making linen from the flax seed.  Don’t know what flax seed is?  Most people don’t, so I took a picture of it. 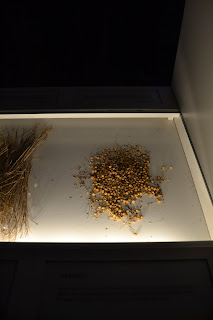 Most people also don’t find flax seed, or linen, to be very interesting, but the creators of Titanic Belfast realized that.  They made it a point to include pictures from the era… 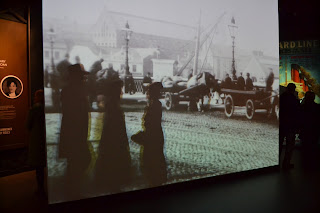 And most notably, interactive components to keep even the littlest tyke entertained.

The Arrol Gantry was the gigantic framework constructed to help build Titanic.  You took an elevator to get to the top.

Once there, a museum worker informed you that you were about to go on world’s slowest roller coaster.  He used “roller coaster” very loosely, as this ride topped out at MAYBE one mile per hour, but I guess some people aren’t interested in riding.  Too bad, because it takes you through the Arrol Gantry, complete with the sounds and information of what went on in the shipyard.

After the ride, you saw some of the pictures of people building Titanic.

The guy overseeing this whole process?  Thomas Andrews.  You know, this guy:

Not his exact words, but you get the point.

This gallery was not the launch where Jack quickly boarded after narrowly winning his tickets to sail on Titanic in a card game.  That was in Southampton, England.  This is just the launch to make sure Titanic could float in Belfast.  It could.

Okay, now that the ship can float, it’s time to put some stuff on it.  Titanic Belfast recreated what a first-class, second-class, and third-class room would have looked like.

Then, it’s time to Bon Voyage!

This is where Jack quickly boards after narrowly winning his tickets to sail on Titanic in a card game.  What the movie doesn’t show you is how the ship really set out for its maiden voyage.  It left Belfast with just crew members on board.  Then it sailed to Southampton, England (where Jack and Rose would have gotten on board), then to Cherbourg, France, then to Queenstown, Ireland, before it finally set sail into the Atlantic.

So much for being the unsinkable ship.  This gallery recounts the telegraphs sent between Titanic and other ships in the area. 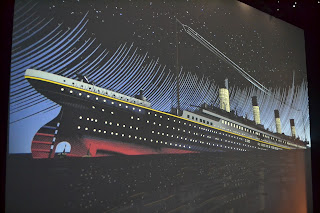 The most interesting: one sent from the Californian to Titanic at about 9:05, about an hour before the ship struck the iceberg, according to “Titanic Inquiry Project.”

Californian: We are stopped and surrounded by ice.
Titanic: Shut up.  I am busy.

By 1:39am, some of the last transmissions from Titanic.

You can read more about the final telegraphs from this article.

Before cell phones, heck, before telephones really, it was hard to spread the word through any other medium besides the newspaper.  Sometimes two editions a day would come out.  The day after Titanic sank, many of the first editions reported that everyone on board the ship had survived.

By the second edition, many people knew the tragic truth.

This gallery was very small and no one would let me take pictures because I had already moved at a snail’s pace through all the other rooms.  It did show fact and fiction for the movie Titanic though, as well as what is considered the most historically accurate movie based on the ship, A Night to Remember.

This gallery was, perhaps, the most impressive.  Again, no art, or artifacts, but the interactive let you explore the ocean floor, to see what this maritime disaster left behind.

You could even stand on a recreation of the ocean floor showing the remnants of this wreck beneath. 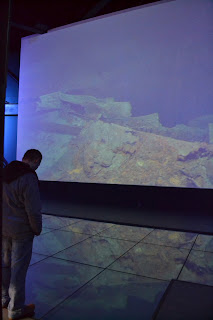 Even though I have been to museums paying tribute to the Titanic that showed actual pieces from the ship, these cool interactive activities made this room well worth it. 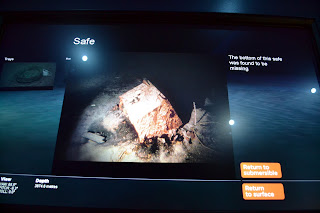 As we departed Titanic Belfast, we could see clothing worn in the actual movie – the only REAL “artifacts” on display.

But real artifacts or not, this museum was one of the best I’ve been too.

Total Cost: £13.50 each ($21.96)
Best Deal: Here’s the not best deal: buying tickets online.  I bought three tickets too many and the tickets were non-refundable.  The museum did extend them for 30 days, but the rest of my group wasn’t going to make it, even then.

Posted by Economical Explorer at 9:24 PM