A Walk Through Amsterdam – The Jordaan

One of the most famous walks in Amsterdam takes you through streets of hookers and rows of cannabis shops.  But another beautiful walk will show you the real Amsterdam, the one where people live.  This is what you’ll see on a walk around the area known as the Jordaan, which easily becomes a whole day of exploring economically.

Jordaan is said with a soft “j,” like in jogging or yogging.  Did anyone else get that obscure reference to Anchorman besides my husband?  Anyway, for real, soft “j” on Jordaan.  The Jordaan district is mostly residential, filled with shops, cute restaurants, and lots of houseboats.

As you walk, make your way to the Anne Frank House, but best to get there early.


Even if you arrive to this historical site at 9am, when it opens, you will most likely be greeted by a line something like this.

If you get to the Anne Frank House before it opens, you have a good chance of not waiting an hour and a half like I did.  Pay your €9 to get in, and experience first-hand the book we all read in middle school.  If you’d like my review of the Anne Frank House, click here.


It will take you about an hour to get through the museum.  Then, you can explore Westermarkt Square, just outside of the Anne Frank House. 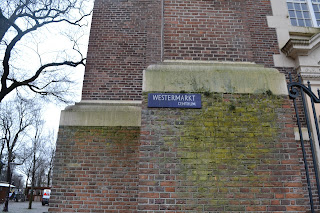 This is where you’ll find Westerkerk (“Western Church”), under which Rembrandt is supposedly buried. 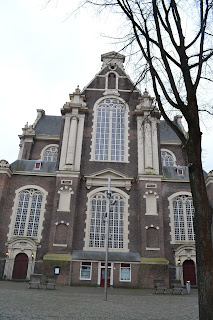 The church tower is the tallest in Amsterdam (that, according to Wikipedia).  I can vouch that you see the tower from many, many places in the city, day or night.


Also, within the square is also a triangle, in which you’ll find three smaller, pink triangles – they call the triangles the Homomonument (Gay Monument, for those who didn’t take a wild guess on that).

The monument is to remember those who have been persecuted because of their sexuality, especially the homosexuals who had to wear pink triangles while imprisoned in concentration camps.  Here is a photo of what all the triangles look like together.


With all the talk of pink triangles, I couldn’t get this Weezer song out of my head.


Next, walk north on Prinsengracht (no clue how you say that), which is the same street where you’ll find the Anne Frank House.  On the other side of the canal (where the street has the same name, don’t ask me how these people get around), you’ll find a Tulip Museum and a Cheese Museum. 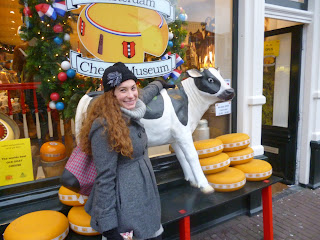 Inside the Cheese Museum, you’ll find lots of cheese to sample – for free!

The Wasabi Cheese was my favorite!  The Tulip Museum has just a few doors down and has lots of tulip-centered souvenirs.  Take your time in this street and in this area… it’s better relished than zoomed through.


After an appetizer of cheese, it’s about time for lunch.  We ate at Spanjer + Van Twist, where I had the most delicious open-faced sandwich ever!

Frank also had the pumpkin bread, only his was non-vegetarian. 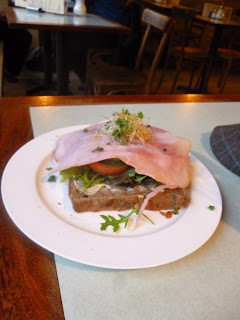 And we had giant beers. 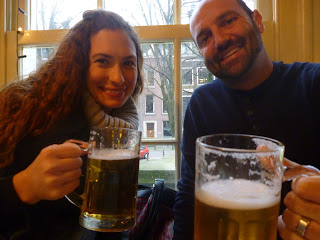 As you walk through the Jordaan, you’ll start to cross into another area of Amsterdam – the Canal Rings. 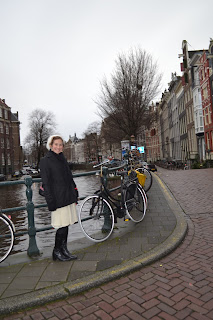 This is where you’ll find canal after filled with houseboats as well as small boats. 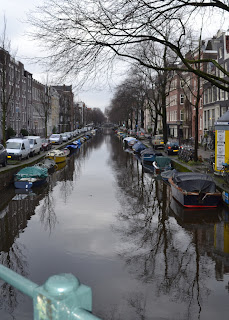 A good place to stop for a cup of actual coffee is Café Van Zuylen, in the Canal Ring area. 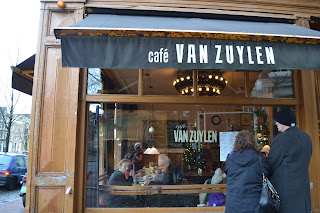 
When it’s time for dinner, look no farther than Paso Dobles, not only a wonderful Spanish dance, but also a great tapas restaurant, with pretty economical food and drinks.

We ordered about six tapas plates between the four of us and filled our bellies.


If your belly's not quite full, chow down on some typical Amsterdam fare.  At Snack Bar Aggie, the chef claimed to have the best friends in the Netherlands.  He also served döner kebabs, which, even though it’s a Turkish food, you can find it everywhere in Amsterdam.

That’s one of the funniest things about Amsterdam, and Europe, in general.  It doesn’t have late-night Chalupas and Gorditas, but it does have its uniquely ethnic döner kebabs...

Posted by Economical Explorer at 9:45 PM