A Walk Through Amsterdam – Old Centre

Amsterdam is the kind of city where I could just stay... forever. How can you not find a place intriguing where nothing is really taboo, including marijuana and prostitutes? But it's not those things that makes Amsterdam great... Amsterdam is actually oozing with culture. 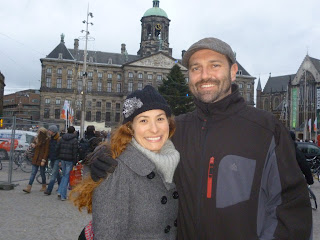 We were in this mecca of toleration for about 48 hours, and in that time, I found it surprisingly affordable. That could be due to the fact that I did not, in fact, actually buy any prostitutes (prices for that start at €50 according to this article).  What I did do a lot of is walking.

One of the walks I took was around the area known as Old Centre, which we actually did for about 1/5 the price of a prostitute!


The Old Centre is just that – the center of Amsterdam.  During the day, you’ll find lots of shops open for business along Damrak and Raadhuisstraat (those are streets in case you are wondering!). 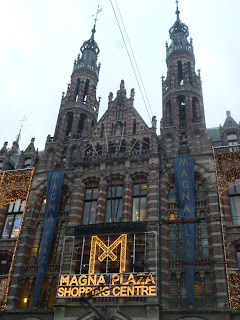 
Smack dab in the middle of Dam Square is where you’ll find street performers by day and people bustling about by night.  And no matter what time of day, you’ll also see this unusual-looking monument.

As you veer off the main square onto one of the several side streets, stop for the famous Amsterdam snack – French fries with mayonnaise.  For about €3, you get not only the fries, but a tiny little fork to eat them with. 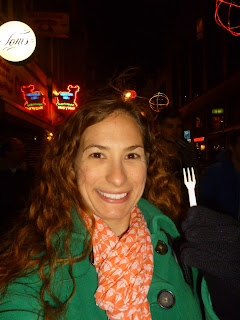 
Those side streets will lead you to the Amsterdam district of De Wallen, the most well-known red light district in Amsterdam (that’s right, there are others).  Both around, and in, the Red Light District, you’ll find plenty of coffeeshops.

Smoking marijuana is legal in “certain designated places” (thank you, again, Pulp Fiction, for that reference), but cigarette smoking is not legal at most establishments.  You’ll actually see “no smoking” signs outside of coffeeshops, even though people are smoking pot inside.  According to signs, prices are about €10 for a gram of cannabis and sometimes as little as €3 for a joint.  A beer is about €4.  That makes smoking in Amsterdam cheaper than drinking.  However, you really can’t do both at the same time as the coffeeshops stick to just selling weed and most do not serve booze.


Next stop, the heart of the Red Light District. 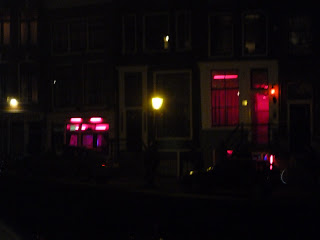 Underneath all the red lights, you’ll find prostitutes in the windows… women with varying looks in various degrees of undress.  There are “no picture” signs in almost all of the windows and I’m told the “bouncers,” who watch after these women will chase after you if you snap a photo.  This was not where I wanted to get in trouble for using my camera.  So, take my word when I say the prostitutes were under red lights, and the transvestites were under blue lights.

Although the concept of a red-light district, and coffeeshops for that matter, all sound like they would attract crime, I felt very safe in this part of Amsterdam.  It is very crowded with tourists, many of them knocking on the windows of the prostitutes to inquire about rates and other… stuff.  We stayed in this area until after midnight and I never felt the least bit frightened.

Posted by Economical Explorer at 12:32 AM

Email ThisBlogThis!Share to TwitterShare to FacebookShare to Pinterest
Labels: Amsterdam