Authentic Amsterdam - What It's Like to Stay on a Houseboat

When in Rome, do as the Romans do. So when in Amsterdam, stay on a houseboat.

I've told you before about the advantages to skipping the hotel and renting a vacation home. I did it in Italy, France, and Sanibel Island. As impressed as I was with those experiences, nothing can beat renting a home in Amsterdam. especially when that home was on the water.

Not even just water view - on the water, on a houseboat, where you can see swans and ducks swimming by the window. 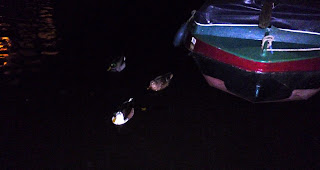 We found the houseboat on VRBO.  My travel group had some reservations about the houseboat. When I asked the owner if the boat would accompany four people, she said, "yes, if you don't have much luggage."


Well, we didn't have much of a choice because we decided to book a place so close to our travel dates and we were still trying to be economical. So, houseboat it was. And boy were we surprised!  When you walk in, you can see the living room, with a pullout couch, as well as a small bedroom. 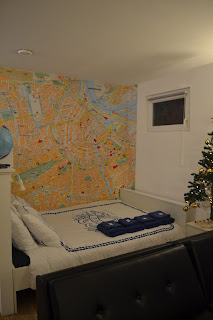 Right next to that, a pullout couch, as well as a small bedroom, complete with a map of Amsterdam.

The best part of this houseboat was the authentically decorated Danish kitchen... 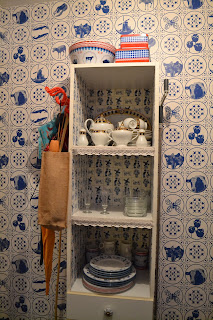 With a fully stocked refrigerator! 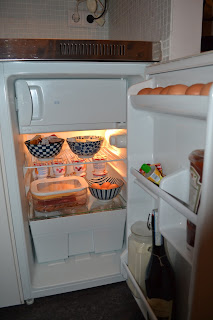 The owner, Annette, thought of everything! We had eggs, bread, sandwich meat, cheese, and milk.

And it wasn't just the kitchen where Annette paid attention to detail, the bathroom was also perfect for houseguests. 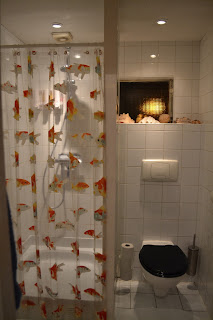 Annette even filled the medicine cabinet with hair products, lotions and soaps!

Perhaps the detail we appreciated most was the bottle of sparkling wine. 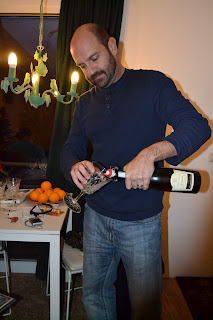 How much would a hotel run with all these extra amenities AND that slept four people?  Well, we wouldn’t know since we couldn’t even find one.  Hotels in Europe traditionally fit only two, maybe three people.

That makes the €200 per night we spent a deal! Rates are cheaper if you aren't staying during a holiday (we were there for New Year's Eve) or if you stay for a longer period of time.  If you’re interested in booking this houseboat, or just talking with Annette, click here for more information.

Best Deal: Having an authentic Amsterdam breakfast that you can only get when a woman who lives in Amsterdam does your grocery shopping.

Posted by Economical Explorer at 4:55 PM