The holiday season in Europe is unlike the holidays in the States.  People in Europe love Christmas.  Each town has a different festival to celebrate the season and it puts the people in a town in a great mood.  I think my favorite city for Christmas in Europe was Brussels, Belgium. 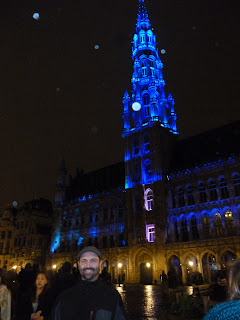 I mean it when I say 24 hours in Brussels is all you need.  Even during the holidays, though your time will be gloriously jam-packed, when you leave, you won’t have missed a thing.  What you will have done is enjoyed Winter Pret, the winter festival here.
In Brussels, everything starts and ends at the Grand Place.  This is the most popular square in all the city.  It’s where you’ll find Town Hall, and most importantly, during the holidays, this is where you’ll find the city’s light show: Les Nuits Electrabel (Electrabel Nights).

The Grand Place is packed with people during any time of the year, but especially during the winter holidays.  Even from blocks away, you can see the action going on at this square.

To see the most notable landmark in all of Brussels, take Rue de l’Etuve to Manneken Pis.  What is Manneken Pis you ask?
This statue has been around since the 1600s and there are several legends surrounding this very unusual landmark.  Did it come about after a little boy relieved himself on an invading army’s gunpowder, thereby making the explosives useless?  Maybe it was from a man who could not find his son and when he did, he gifted this statue to the city.  Whatever the story, Manneken Pis loves the holidays. 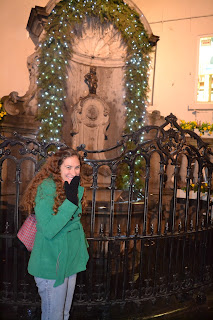 In fact, Manneken Pis loves lots of days, and has different outfits to prove it that you can see by clicking here (Personally, I’m a little sad that I didn’t see him dressed up as Santa Claus).  In fact, he has about 800 outfits, sent from embassies, tourist offices, and people around the world.  You can see them all at the Musèe de la Ville de Bruxelles, also known as the Museum of theCity of Brussels.  It costs €4 to enter the museum (which I did not go to). But I digress, I was talking about the holidays in Belgium, not little peeing boys.


The Winter Pret continues throughout the city, but you’ll find the most to do in the area known as the Fish Market. 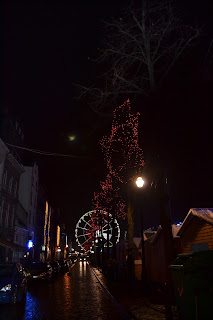 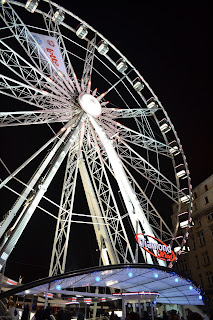 And an ice skating rink.  Which Frank was dead-set on going to.  Luckily, it was pretty economical at only €5 to skate. 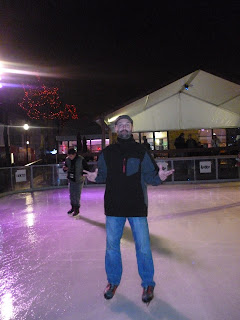 It was really fun for a few laps! 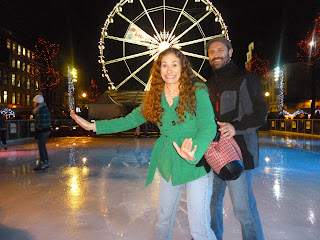 Then we remembered we weren’t much of ice skaters and our ankles hurt.  So we did what any normal person would do and found a bar.


We had to convince a lady at a nearby stand to bring us the beer to the actual ice, but she was down. 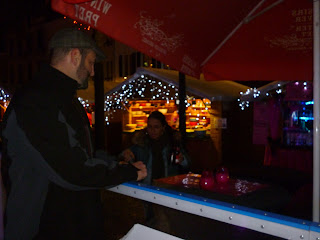 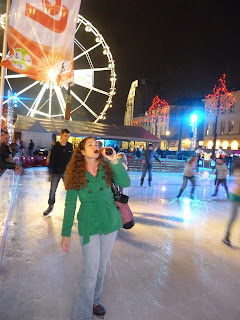 This part of the Winter Pret also has about a mile worth of booths in what is called the Christmas Market.  You could find shirts and candles for sale, as well as food.

As you walk the streets through the Winter Pret, you’ll see some cool features unrelated to the holidays.  For example, a comic strip on a wall:


In the “things I didn’t know until I got here” file: Brussels is home to many famous comic strips.  The one Americans are most familiar with is The Smurfs! 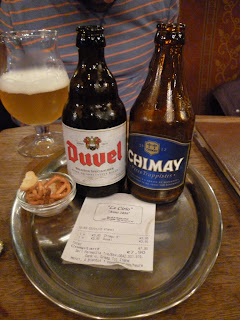 Winter festival or not, Brussels is a great place to spend a day.  If you have more time, do yourself a favor and go to Bruges as well (about an hour away) for a complete taste of the Belgian experience.

Ice skating: €10 for two people
Drinks at ice skating rink: €8 for two
Food from the booths: €18 for calamari and champagne, €10 for sausage sandwich and beer
Drinks at Le Cirio: €7.90

Posted by Economical Explorer at 1:58 PM