A Weekend in Bruges, Belgium – Four Things You MUST Do and Two You Can Skip

Last summer, I went to a glorious medieval town in Italy. Barely six months later I found myself in another town dating back to the first century BC – Bruges, Belgium.


Economical is not the first word I think of here, but you can save by cutting out the attractions that aren't worth your money... or time. Here are four things you must do in this picturesque city and what to skip.

Since Bruges doesn’t have an airport, you'll no doubt arrive to this town midday via a train from Brussels. Your first stop: The central part of Bruges, where you'll find…

Four Things to Do 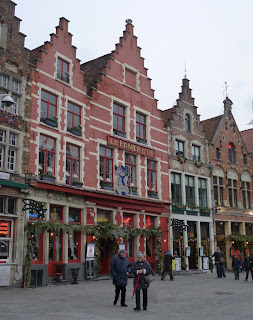 
Stores and restaurants reminiscent of gingerbread houses line the Markt, which, during the holidays, is bustling with booths selling everything from Irish coffee... 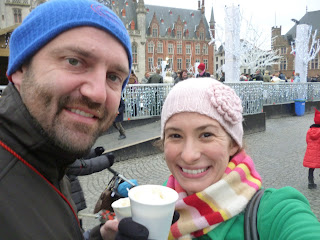 The Belfort is the biggest architectural attraction on the Markt, built in the 13th century. 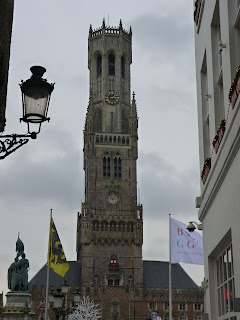 As you walk around Markt, take in the sights and sounds of a little town with lots of tourists. But most importantly, take in the smells, as there are delicious scents on every corner. And the best thing is, walking around is free.


Bruges is most well-known for its chocolates.  From the usual... 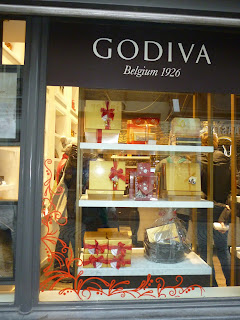 
To the flat out weird.


Sample away until your stomach hurts. The wasabi chocolates can be found at The Chocolate Line, just a few blocks from the Markt, but I thought the best sweet stuff was sold at Dumon, right behind the Markt.  That's where we got chocolate dipped orange slices.


As you walk the streets, you’ll find lots of clothing stores as well, and many a lace shop, as Bruges is known for the intricate lacing work.

As long as you watch your wallet literally, you’ll only spend about €8 on a bag of chocolate, even at the more expensive places like The Chocolate Line.

This is by far the best way to see this medieval city. 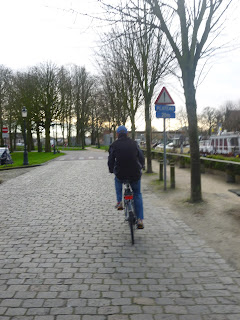 You can bike along bike paths, canopied trails, and bridges around this medieval city.  The paths will take you past windmills… 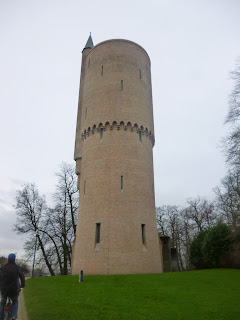 And through the Koning Albert I Park (that’s King Albert if you don’t speak Dutch).

If you’re up for a longer journey, you can cycle the approximately seven kilometers (that’s four and half miles) to the city of Damme. 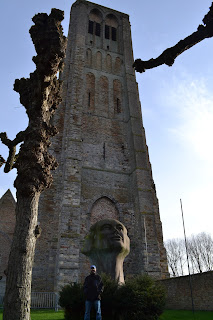 The trees surrounded the church look like something out of The Wizard of Oz. 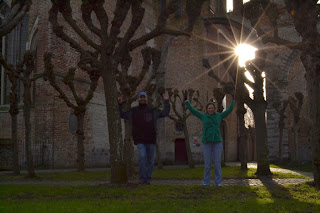 Word of warning: in the winter time, Damme is just a little dead (Damme city!).


Even the windmill was closed for business.


If you do decide to embark on a bike ride during the winter months (we were there in January), BUNDLE UP!

But besides frostbite, the bikes were only €12 per day.

The food in Bruges will not disappoint you.  We went to several awesome restaurants, but no place had better food than De Windmolen.  Mainly because it felt colder than 30°F outside, but also because of this: 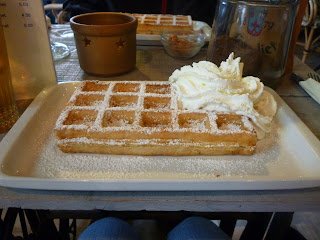 The Belgians do not play when it comes to Belgian waffles.  You can by them from stands all around the city for about €1.50, but we shelled out €4 each for this delicious treat in a restaurant, complete with whipped cream and powdered sugar.  The view from this restaurant couldn’t be beat either.

The Belgians also love them some seafood.  Mussels are the specialty. 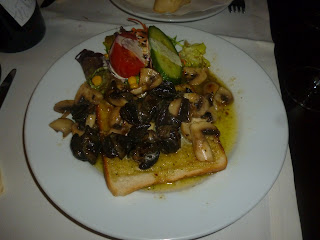 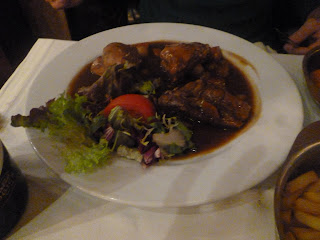 And you can’t forget frittes, better known as French fries (actually invented in Belgium, so they should be called Belgian fries, but I don’t think that has the same ring). 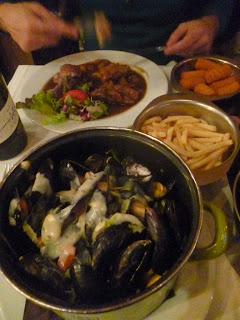 The mussels, escargot and rabbit came from the restaurant on the Markt called The Belfort.  The food was delicious, the service was less than desirable.  Plus, we pretty much had to take out a loan to eat here… the grand total of the bill at the Belfort was €112.50 (that’s $150!).


Just a few blocks away, we found superior service along with delicious food at t’ Fonteintje.

There, we got seafood gratin (me) and sausage rolls (Frank)

This meal at t’ Fonteintje only cost €59, almost half of our first dinner at The Belfort!

And you can’t forget the drinks.

Each beer runs about €4, but some are more expensive because the alcohol content is higher.

If you’re short on time or money, take the Salvador Dali exhibit  off your list.  It is in the Belfort in the Markt area of Bruges.  As far as Salvador Dali exhibits go, the one in St. Petersburg, Florida is much, much better.  But, this one does have a lot of Dali’s illustrations based on various books, so it provided a unique perspective that I have not seen before.

Church of Our Lady


This church claims to have the only Michelangelo statue to leave Italy in his lifetime.  Apparently it was a Madonna and Child work and I would have loved to see it, but I could not find it.  I did see some of the other very intricate work of the church inside. 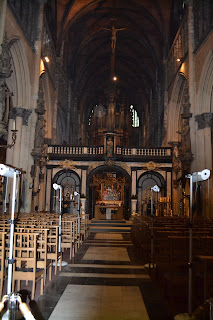 You’d think a person could find a giant Michelangelo statue, but Frank was rushing me to get outside.


Still, it's free to get inside this church, so you only have to spend your time if you're interested in going.

We arrived in Bruges with no place to stay (I should write a post on procrastination during travel in the near future!).  It was getting dark and we were getting anxious.  Also, every single street in the city looks exactly alike.  After checking with a few small hotels, with only five or six rooms, and seeing that there were no vacancies, we decided to pay the price to sleep at a larger hotel.  Unfortunately, there were really no vacancies there either, so we ended up at Hotel ‘t Zand. 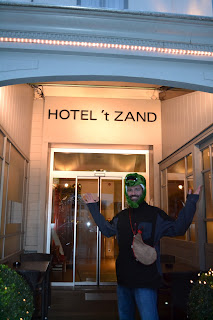 This hotel was nice and clean, but very simple.

The bathroom was the nicest part, and I can’t be certain, but I think it had a heated floor.


There was a small breakfast each morning, with eggs and toast.  Unfortunately, while those smaller hotels were charging about €70 per night, we ended up spending about €110 per night, for a grand total of €221.

When we were departing Bruges, we tried to buy two tickets to Brussels at a kiosk at the train station for €27.  For some reason our card would not work though, so we went to the counter where we purchased two tickets for only €19.80.  To that I say, check with both the counter and the kiosk before making any purchases.

Posted by Economical Explorer at 9:17 PM